For many people with disabilities, employment is one big step toward independence. Be a part of our conversation using  #NDEAM as we celebrate National Disability Employment Awareness Month this October! Your support helps people succeed! 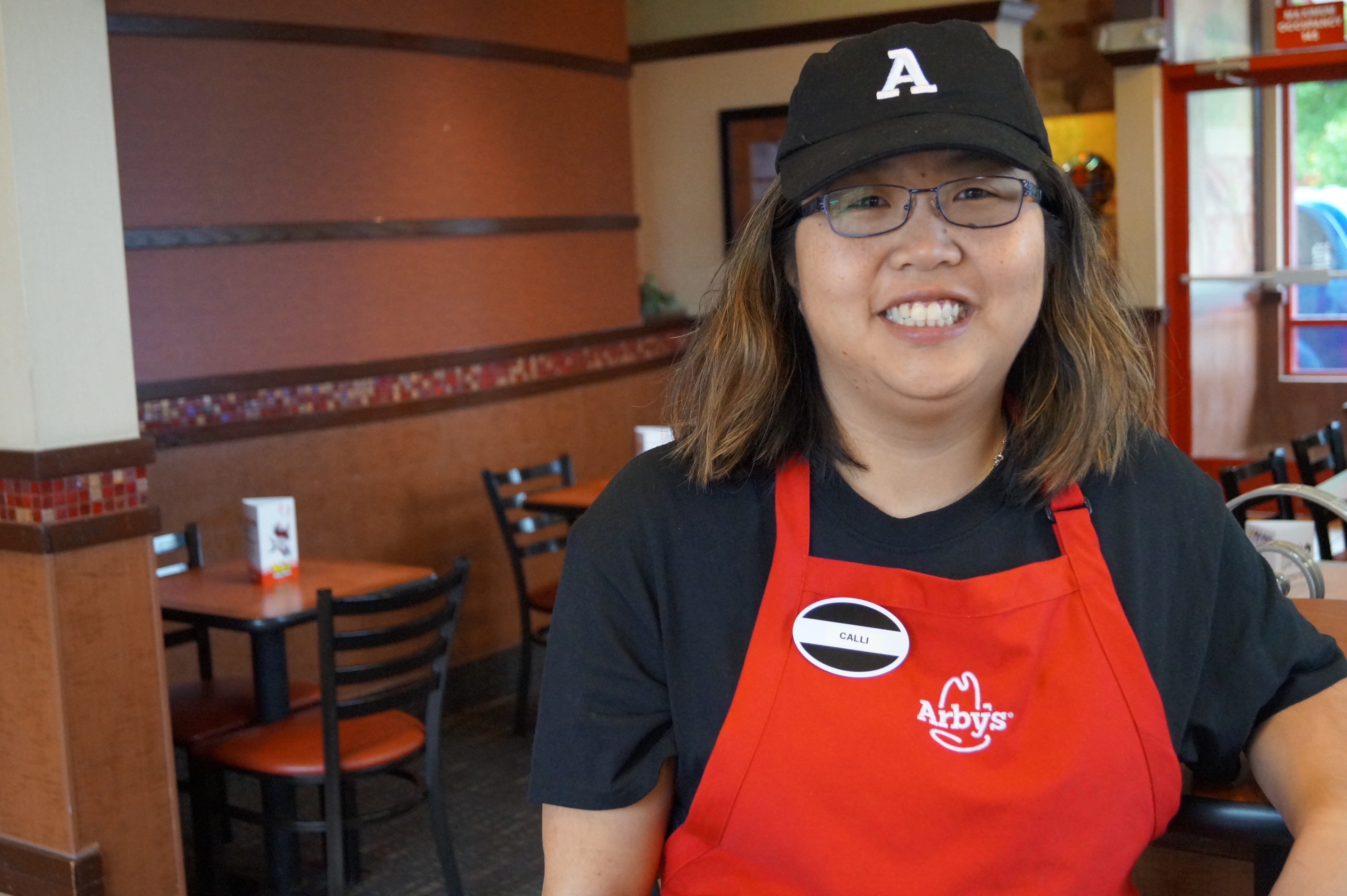 Calli is in her third month working at Arby’s in Plymouth as a Dining Room Ambassador. Some of her responsibilities include cleaning and maintaining the dining room, and stocking supplies. She was trained for the job by a peer, Michelle, who has worked at Arby’s for a number of years. The peer mentoring program is part of Opportunity Partners’ Together Works Better initiative. She was hired because of her energy, enthusiasm and friendly personality. These traits are assets in greeting customers and providing the best possible customer experience.

“I learned customer service like to say, ‘Have a good day,’ ‘Thank you for coming,’ and ‘Are you done with your tray?’ ” Calli said.

She works Monday through Friday, covering the busy lunch rush. “I like to work with people and like getting to know the customers,” she said.

Calli, who has lived in her own apartment for 14 years, said she likes to save the money she earns or use it toward bills. “It’s nice to be independent and to be able to do what I want to do.” 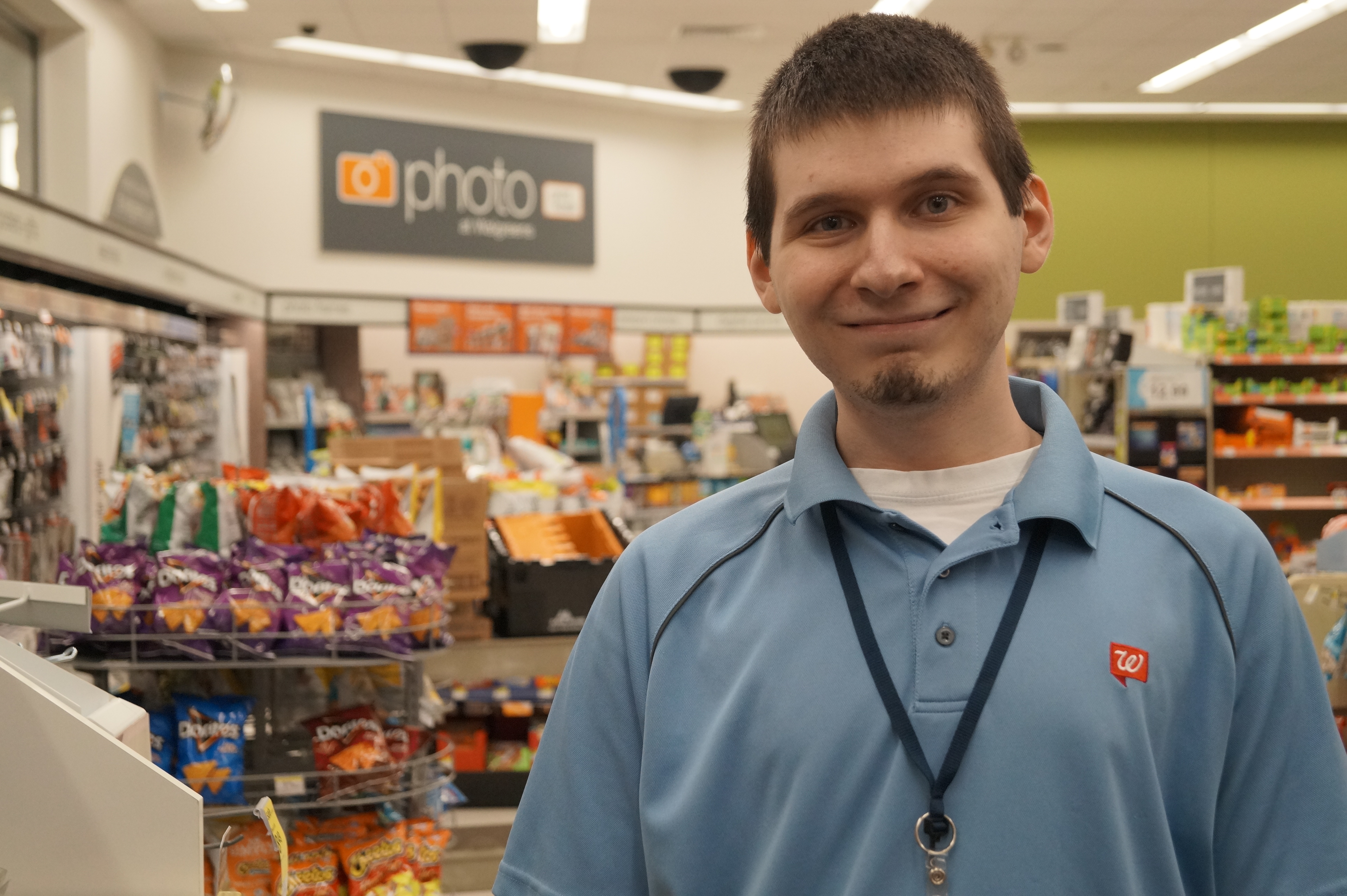 For Eric, working at Walgreens in Maple Grove brings an opportunity to connect with people in his community. “I enjoy it. I like interacting with people and working with the cash register,” he says.

Eric has been a proud Walgreens employee since the beginning of this year. He graduated from high school last year and soon after began working with Opportunity Partners to find a job. “The managers were blown away by his pleasant personality, diligence, and willingness to take on any assigned tasks,” Vocational Evaluation Specialist Anthony Hollingsworth says. “They knew from only a few days into the evaluation that they wanted him on their team!”

When asked if he likes his coworkers, Eric quickly replies, “Oh, totally!” He feels that Walgreens is a great environment for a first job and that he is well supported in working there.

Eric loves the fact that he has a job and that he is able to make his own money. He likes to save up for vacations and will be heading to Mexico with his family next year! 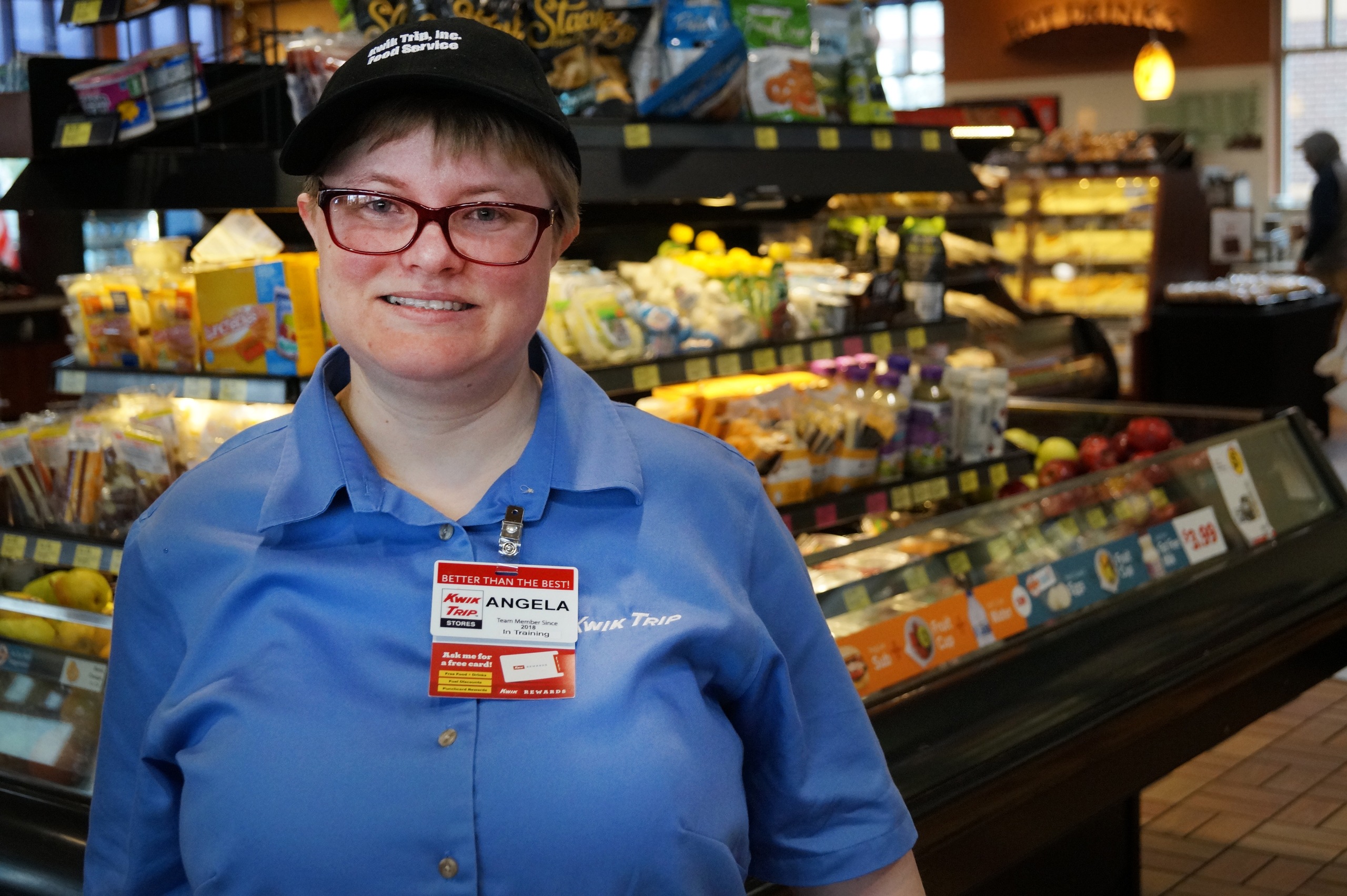 Angela made the choice to seek out competitive, integrated employment when she saw the success of her peers at Karlins Center. On her own, she reached out to the workforce center as well as Kwik Trip. Her persistence eventually led to getting her first independent job!

Working three days a week since July of this year, Angela is hoping she can increase her hours if possible. She loves her coworkers. “They tell me I’m a fast worker,” Angela says. “They tell me I do a good job.” She feels that taking Opportunity Partners’ Walgreens REDI program last year helped prepare her for employment.

At Kwik Trip, Angela’s responsibilities range from cleaning, to stocking, to wrapping bakery items in the kitchen. She hopes to start working the cash register soon. “I like that I’m making more money and that it’s closer to my house,” she says.

Angela is hoping to stay at Kwik Trip long enough to participate in the 401k retirement program. 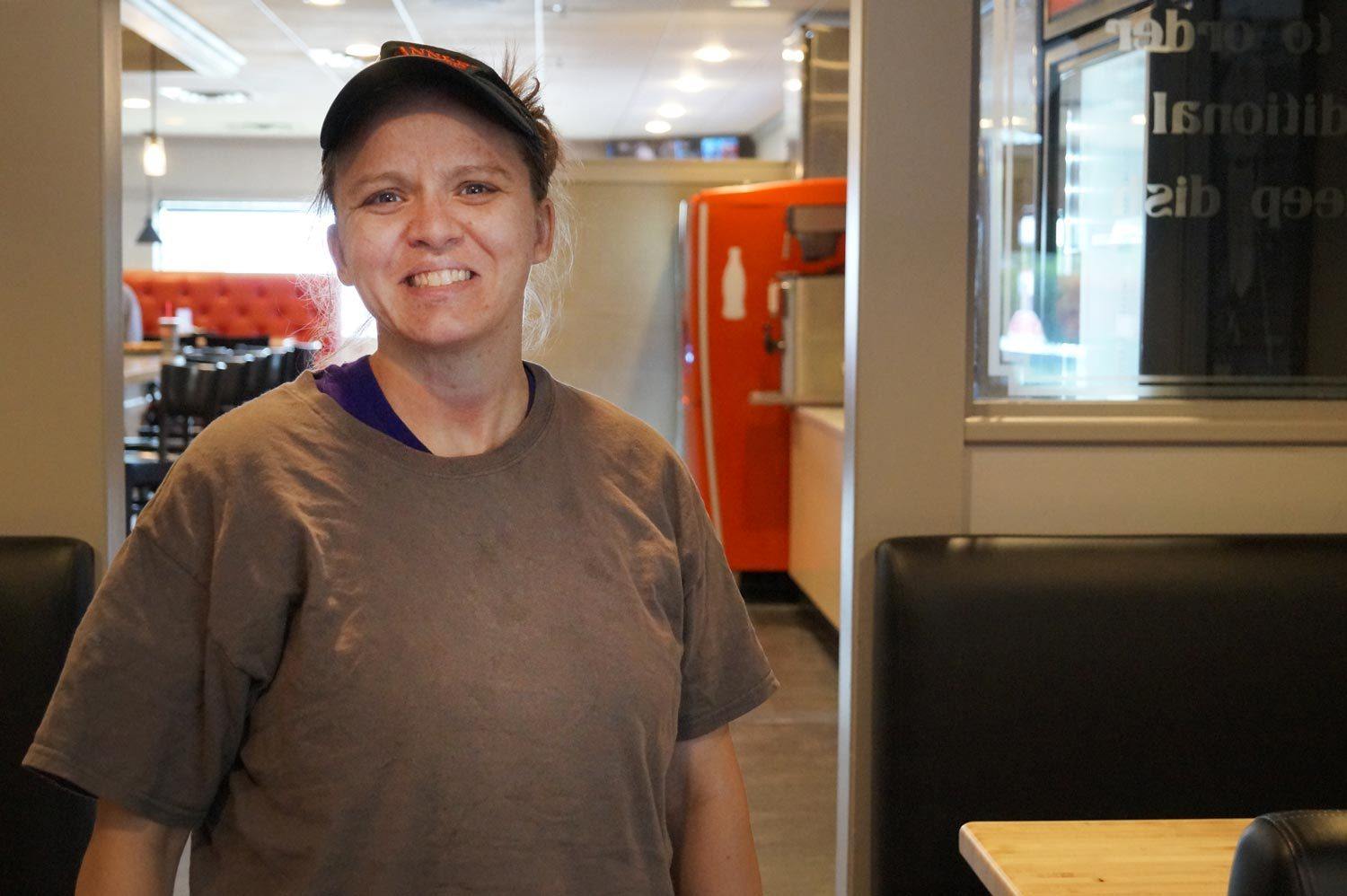 Tessa has worked at Davanni’s for nine years! She mainly works washing dishes, but knows how to make salads and is now learning how to make hoagies. Tessa says one of the best things about her job is that her managers are incredibly receptive when she tells them she wants to learn new things!

Tessa says she is proud to have her job. “I know it’s hard for other people to have jobs,” she says. Tessa works twelve hours a week and has no plans to slow down soon!

Over the past years, Tessa has learned how to be a better advocate for herself. “I’m shy. So it’s hard to speak up sometimes,” she says. “But seeing other people speak up prompted me to be like ‘I want to learn this.'”

She hopes that her employment success will inspire others to seek competitive, integrated employment in the way that others have inspired her. 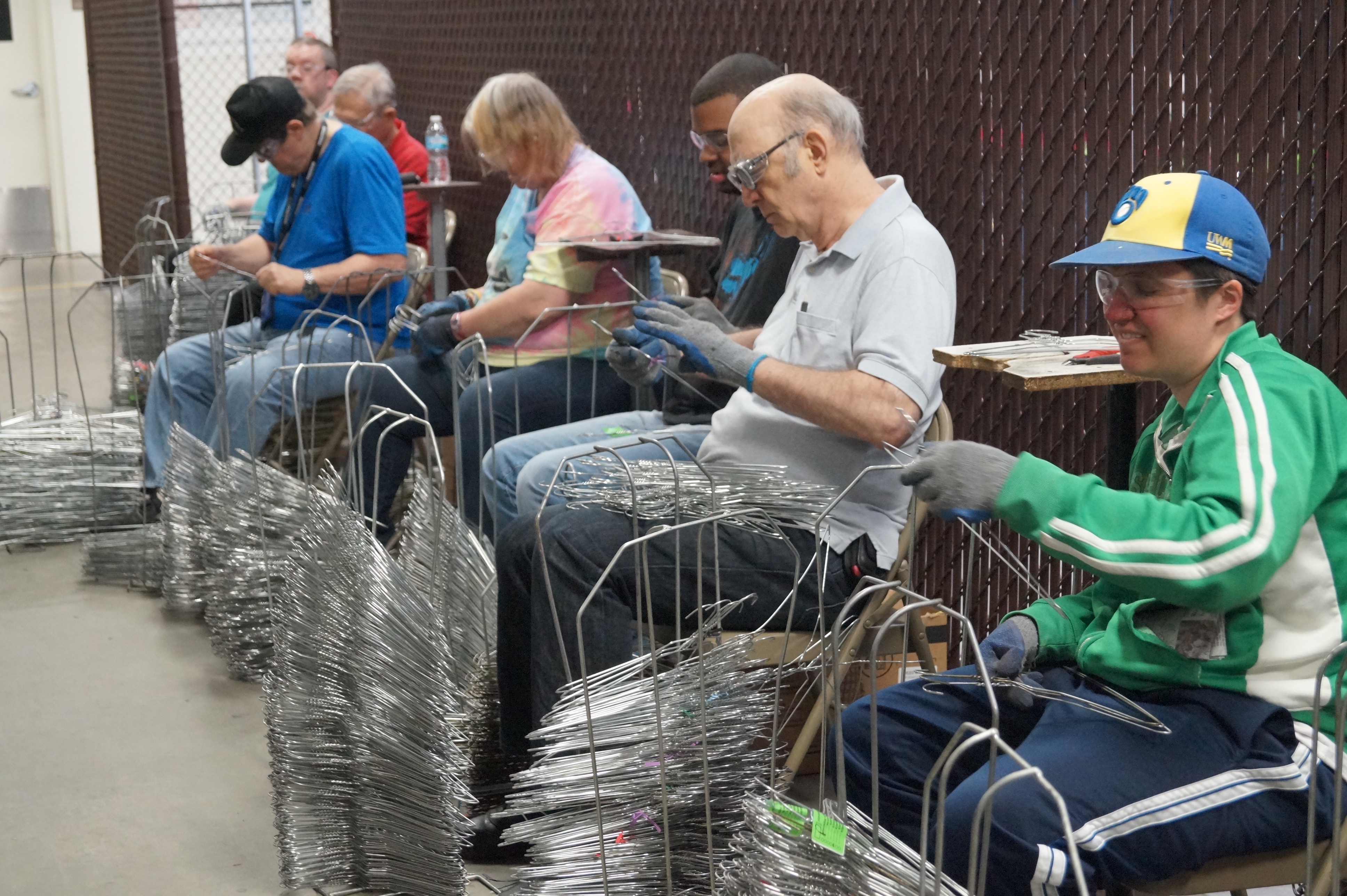 Opportunity Partners team members sort and process up to 40,000 clothes hangers each day for Cintas in St. Paul. “It’s nice and fun, and I have good friends here,” said one worker. The site recently relocated to OP’s Koch Campus in Minnetonka, where the hard working crew works on the job Monday through Friday.